True to their word, there were no surprise fees, either.

I hired Jensen Moving and Storage to move my things across Florida. The two men on my job showed up on time, acted professionally, weren't rough with my stuff, and worked hard and steadily amid high July temperatures and humidity. Any damage was minor and unimportant to me. A few leaves came off my artificial trees. A couple of small pieces of laminate came off an old wall unit that already had seen better days and that I did NOT ask them to take extra care with. Frankly, I've caused similar damage to it with no effort. What impressed me most was that their estimate was spot on, despite not seeing the load beforehand and going by whatever my sister told them. (She is not familiar with my stuff, as she lives in another state, but I had her getting estimates.) If I had not run late meeting them at the unloading site, the job would have timed out EXACTLY as they estimated. True to their word, there were no surprise fees, either.

I'd give more stars if it was an option, highly recommend.

JB moving was an excellent moving experience. Right from the quoting, moving itself, the crew and the final bill, which was NOT pumped up as I have experienced with other movers. The crew was fast, cautious and very polite. I'd give more stars if it was an option, highly recommend.

I appreciate their work ethic and professionalism.

Derick and Devon were phenomenal. They provided Care, consideration and were able to flex when asked for additional items to transfer. I appreciate their work ethic and professionalism. Very friendly men hard at work. Well done!

The best movers I've ever worked with.

Austin & Tom were two of the best movers I've ever worked with. 95 degrees 90% Humidity made the job unbearable and they both were amazing.

5 STARS. What great service from Austin and Tom today. Friendly, professional and efficient. Everything went fantastic.

The guys know what they are doing!

The guys know what they are doing! I stored my furniture with Jensen for 9 months and they returned it in perfect shape. The delivery was quick, efficient and a pleasurable experience. Yes, I highly recommend them! Don Loftus.

We will definitely recommend the best movers ever thank you

Deric & Devon are the greatest movers ever,I had my things all over the place and these guys was paitent,respectful,and consistent,we will definitely recommend the best movers ever thank you

Jensen Moving & Storage is the BEST thing that ever happened to my Business here in the State of Florida for the past three (6) Years. They are Dependable and Very Effective. I use Jensen Moving on a Weekly Basis for ALL my Deliveries throughout the State of Florida. Jensen moving is not just a moving / residential company. They have delivered many Skids of Commercial Doors and Hardware to many of my Projects without damaged. They are PUNCTUAL since time is a factor in my business. I would definitely recommend Jensen Moving and Storage to anyone. They are reliable and very trustworthy.

Fantastic movers! Deven and Derek moved my mother from PSL to Orlando, demonstrating the utmost care and professionalism. Friendly and super accommodating, they made the stress of moving a breeze. You can't beat the price either! I'm happy to recommend them to anyone. Thanks for everything guys!

See how other talk about our services

Get a Free Quote!

No matter what happens, we have a solution for you. trust us. 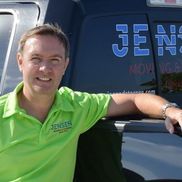